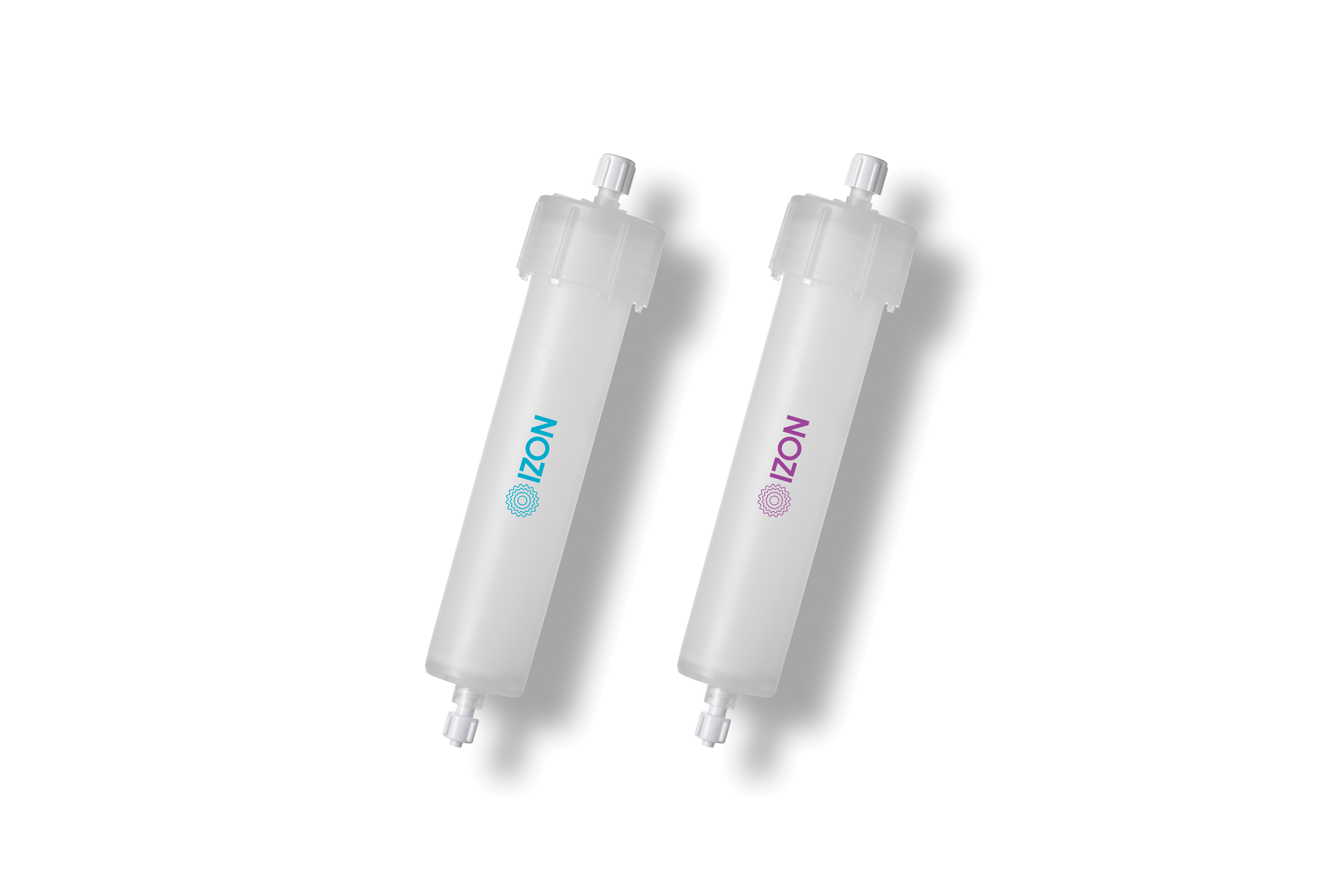 /About
Interested in using the qEV10 in your research? Here we highlight some of the best examples of research using qEV10 columns published to date.

Here we highlight some of the research undertaken using qEV10 columns. The research that we have chosen reflects those studies which have made an effort to adhere to best practice within the field of EV research and further their respective research areas. Note, papers reported here used the qEV10 Legacy; they were submitted or published before the release of the qEV10 Gen 2.

Pre-concentrating with tangential flow filtration prior to qEV isolation allows for pure, functional EVs to be isolated from large volumes

‍Isolating EVs from large volumes is often essential when large numbers of EVs are required and/or conditioned cell culture media is used as a starting sample. Whilst the qEV10 and qEV100 make it possible to isolate EVs from 10 mL and 100 mL loading volumes, respectively, the question remains of how to efficiently concentrate and isolate EVs from volumes even larger than this. Several techniques are currently in use to pre-concentrate EV-containing samples, but detailed comparison is important for the field to identify the best technique.

In comparing the techniques, TSU performed better than PSU in several ways. PSU-isolated EVs showed membrane blebbing on transmission electron microscopy (TEM), suggesting damage to their integrity. PSU-isolated EVs also showed weak positive staining for the non-EV contaminant calnexin in some fractions and trended towards a lower particle:protein ratio than TSU, suggesting that EV purity was lower in PSU isolates. EVs were found to be present with little to no contaminating protein in fractions 2-4.

Both techniques allowed for the detection of mutated DNA in EVs isolated from acute myeloid leukaemia cells. However, only EVs isolated using TSU were internalised into HeLa cells and delivered their DNA cargo – suggesting that PSU was unfit for the functional studies in this context.

Taken together, the data in this study suggest that pre-concentrating large volume samples with tangential flow filtration allows for pure, highly functional EVs to be isolated using qEV columns. This may be particularly useful for those wanting to compare EVs isolated using the same columns size from samples of vastly different volumes such as plasma and conditioned media. It should also be of immense interest to those in the EV therapeutic field as this technique could allow for the isolation of EVs from industrial-scale volumes of starting sample.

Lymphatic exudate was collected the day after surgery and immediately processed by centrifugation to remove cells, debris and platelets. EVs were then isolated using the qEV10 column (35 nm Series). The authors used samples from three patients to identify the optimal collection volumes for EV purity and concentration for their sample, allowing them to select a purified collection volume to suit their specific needs.

Peak EV elution occurred between volumes reported as fractions 2 and 4, in which contaminating protein concentrations were minimal to none. These fractions were therefore highly pure as they had a high particle to protein ratio. A panel of positive marker proteins and non-EV proteins was used to confirm EV purity. EV markers were enriched in fractions 2-4 and the lipoprotein protein ApoA1 was mainly present in fractions 5 and above, confirming purity. The presence of cup-shaped EVs was confirmed using TEM. Doing this analysis upfront allowed the authors and readers to have confidence in the purity of EVs used in this study.

The authors then measured the surface concentration of 37 proteins using a flow cytometry assay, including three EV markers CD63, CD9 and CD81 against which the other proteins were normalised for each patient. Four of the surface proteins (CD24, CD29, CD44 and CD146) are known to be associated with breast cancer. CD146 and CD29 levels were found to be higher on patients with HER2+ breast cancer.

This proof-of-concept study is a promising first step in identifying biomarkers from lymphatic exudate. If specific EV biomarkers could be correlated with patient outcome in future studies building upon this research, the sampling of exudate from lymphatic drains could provide a non-invasive post-surgery diagnostic to guide further patient management.

‍N.b.: The article summarised here is based on a publication that is yet to be peer-reviewed.

Mouse models are a valuable first step in testing the bioavailability and pharmacokinetics of EV therapeutics. However, their physiology is vastly different to ours and thus the authors of this study turned to a primate model (pig-tailed macaque).

The cells used in this study were transfected with the palmGRET, a modified luciferase protein for EV tracking. This study uses the technology evaluated in the study by Chetty et al1, employing tangential flow filtration to concentrate large volumes of cell culture media down from 3 L to 75 mL before being labelled with MEMGlow, a self-quenching lipid dye in the near-infrared spectrum. Unlike Chetty et al, further ultrafiltration concentration was used between tangential flow filtration and isolation using the qEV10 column (70 nm Series). A final ultrafiltration step was used after qEV isolation to further concentrate the isolate.

Volumes purified by the qEV10 were characterised by measuring protein concentration, showing the majority of protein was outside of EV-containing fractions 1-4. Interestingly, a small peak in protein levels was seen in fractions 1-4, but this corresponded to EV marker proteins CD63, CD9 and TSG101 and was devoid of the contaminant protein calnexin. Pooled fractions 1-4 contained cup-shaped EVs as confirmed using TEM. The same flow cytometry assay as used by Ekström et al2 was used here to profile EV surface protein expression. Both labels were confirmed to be associated with EVs. However, palmGRET luciferase activity was also present in later non-EV fractions, emphasising that EV labels artificially expressed in cells should not be presumed to only be present within EVs.

Intravenously injected EVs but not intranasally introduced EVs were measurable in the blood stream of macaques between 1 minutes after administration to >1,000 minutes after administration. Intranasal dosage did not result in uptake into cerebrospinal fluid, contrary to reports from mice. However, higher intravenous EV doses were detectable in cerebrospinal fluid. Several doses of increasing concentration of EVs were investigated, with the plasma half-life of EVs decreasing with higher doses. However, as repeated, different concentrations of EV doses were given to the same macaques, this was an artefact of repeated dosage. When given first, the highest intravenous dose had the highest plasma half-life. This process of increased clearance with subsequent doses did not appear to be due to an inflammatory response. However, EV labels were detected in peripheral blood mononuclear cells including monocytes and granulocytes. B cells internalised the greatest proportion of EVs. As such, this appears to be the clearance mechanism for intravenously injected EVs.

A pilot study in mice showed that intranasal introduced EVs were mostly present in the nasal cavity and in the lungs, whilst intravenously injected EVs were mostly present in the liver but also the lung, spleen and kidney. However, the biodistribution in macaques deferred, highlighting the importance of these non-human primate models. No lung localisation was seen with intranasal administration. However, uptake into the liver, spleen and lung within 60 minutes. Weak EV signal was also detected in the medulla, suggesting slight brain uptake. Those cells internalising EVs in the spleen were mainly B cells, in agreement with previous results.

This is an important study which evaluates the pharmacokinetics and biodistribution of EVs administered to a non-human primate (i.e., an animal physiologically similar to humans). The authors showed key differences to what had previously been shown in mice and indeed to what was found in mice in the current study. This emphasises the value of non-human primate models before transition to clinical trials in humans. Importantly, there was a lack of localisation of EVs to the brain following intranasal administration and a decreased half-life through uptake into B cells and other peripheral blood mononuclear cells of intravenously delivered EVs over subsequent doses. This will have important implications for EV therapeutics.