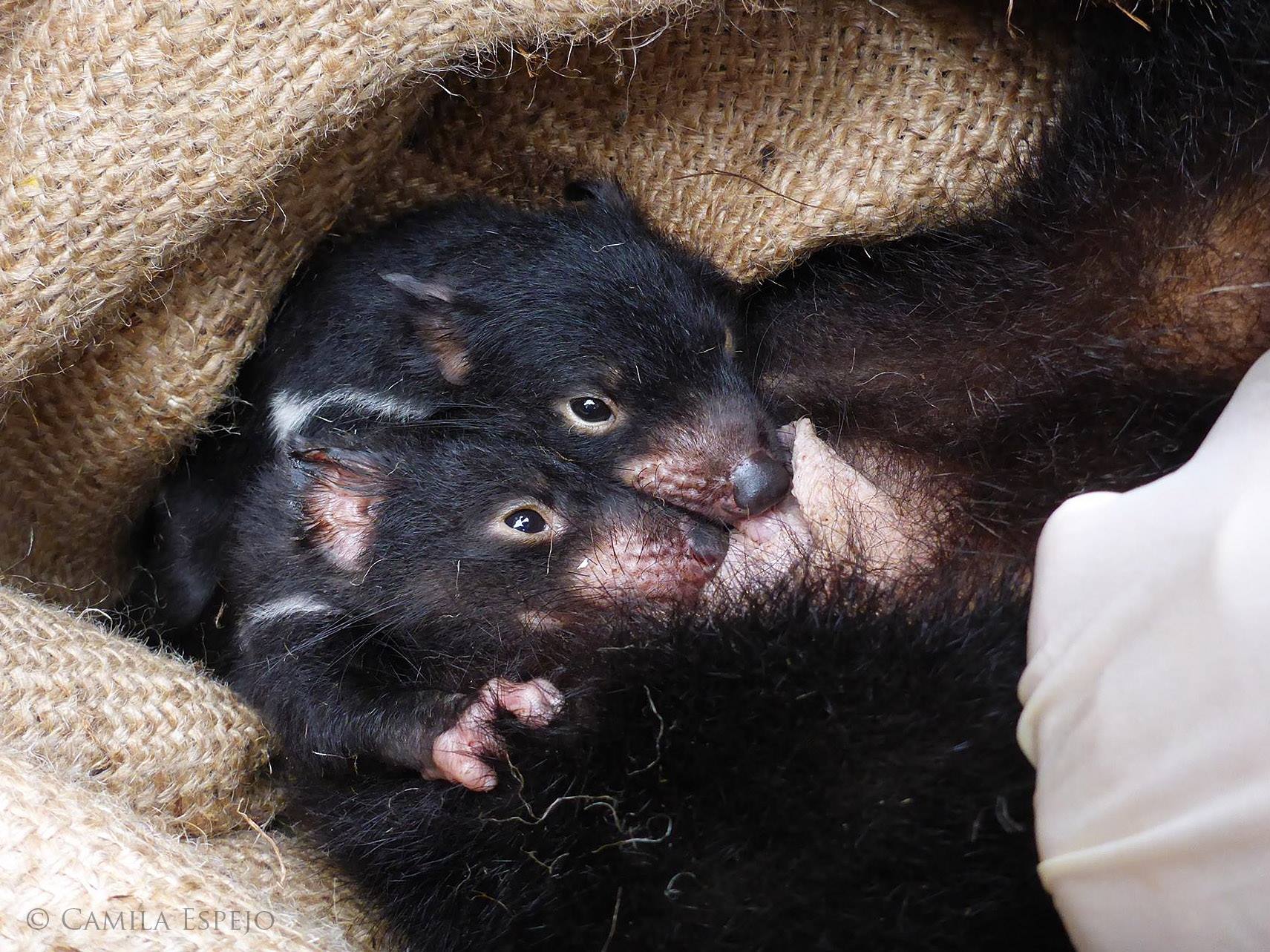 /About
The Tasmanian devil species is threatened by transmissible facial tumours. Do extracellular vesicles hold the key to better conservation strategies?

“Some tumours are bigger than others, you know, and then some tumours are more horrible than others. But I remember one time that we saw an animal that was in terrible, terrible condition, a female. And she was lactating. She was so skinny that you could see absolutely all the bones, and she was without hair. And yeah, it broke my heart. It is very hard. And then you see that somehow the animals are still kind of living their lives. It's heartbreaking.”

The uniquely transmissible facial tumour was first documented by Dutch wildlife photographer Christo Baars in 1996.<super-script>1<super-script> The disease has since wreaked havoc on the species, slashing population numbers and causing devils to become listed as an endangered species in 2008.<super-script>2<super-script> As if this weren’t challenging enough, scientists were then thrown another curveball, says Espejo.

As a transmissible tumour, DFTD is unique, although not unheard of. Examples of contagious cancers can be found in dogs (canine transmissible venereal tumour) and in multiple species of molluscs.<super-script>4,5<super-script> In humans, there have been several isolated incidents whereby cancers were transmitted during surgery (from the patient to the surgeon) and organ transplants.<super-script>6,7<super-script>

For Tasmanian devils, transmission is presumed to occur as a cancerous allograft, whereby an infectious cell line is passed directly between animals through biting behaviours during mating and fighting.<super-script>8,9<super-script> DFTD progresses quickly and leads to death of the host within 6-12 months of clinical presentation.

During a stint as a volunteer supporting trapping efforts in 2016 for the study of the Tasmanian devil physiology and its interaction with the transmissible cancers, Espejo recognised the need for further DFTD research. She completed her PhD in 2021 under the supervision of Bruce Lyons and Greg Woods from The Devil Immunology Group University of Tasmania and Richard Wilson from the Central Science Laboratory at the University of Tasmania, and recently published her work aimed at using the extracellular vesicle (EV) proteome to distinguish between the two independent DFTDs, DFT1 and DFT2.<super-script>10<super-script> The results are promising, says Espejo: “We are now working on an early diagnostic for DFTD that we can potentially deploy into the field.”

The arrival of DFT1 caused a significant population decline of approximately 80%.<super-script>11<super-script> Now, DFT2 has created an additional pressure on the species.

As a newly discovered tumour, relatively little is known about DFT2. To study and manage DFT2, however, there is a need to identify it in the first place.

DFT1 and DFT2 can only be identified once tumours have been established on the devil’s face, and the two cancer types cannot be distinguished visually. Currently, confirmation of the cancer type is only possible via biopsy of an ulcerated tumour and subsequent analysis via histopathology, PCR, cytogenetics and immunohistochemistry. Taking a biopsy, however, is less than desirable, says Espejo. “Sometimes, tumours are not ulcerated. And you want to avoid taking a tumour biopsy, because you could potentially speed up the process of tumour development or create a secondary infection.”

In addition to enabling further DFT studies, a serum-based tumour biomarker would be hugely advantageous to conservation efforts. While researchers continue to work on vaccine development, conservationists are putting measures in place to preserve the species. Healthy Tasmanian devils are bred in captivity, and there is also a healthy wild population maintained on Maria Island, several kilometres off the coast of Tasmania. Managing healthy populations, however, requires a lot of resources; the latency period of the disease can be as long as 13 months, where the disease is harboured with no visible symptoms. Therefore, devils are kept in quarantine for 15 months to ensure the animal doesn’t have DFT before it is transferred to Maria Island. “This is what managers are most excited about, especially if you had an early biomarker that could detect DFT in the latent stages of disease – this would be so helpful for intervention programmes where animals need to be moved around.“

To explore the role and potential utility of extracellular vesicles (EVs) as differential diagnostic biomarkers for distinguishing between DFT1 and DFT2, Espejo and her colleagues in Australia (University of Tasmania and La Trobe University) characterised EV proteomes from devil serum samples and cultured devil cells.

The key finding was the identification of tenascin-c as a protein enriched in EVs derived from the serum of devils infected with DFT2, compared with EVs from DFT1-infected devils and healthy controls. The relative enrichment was first identified by Espejo and colleagues in EVs of cultured cells, and subsequently verified in serum samples. Tenascin-c falls into a category of proteins involved in the epithelial-mesenchymal transition, a biological process in which epithelial cells lose their characteristics and acquire mesenchymal features.<super-script>12<super-script> “Many cancers do that in humans, because when they come to the undifferentiated state, especially in breast cancer, they can travel and metastasise much better – because it (EMT) gives them migration properties.” Tenascin-c promotes cancer cell plasticity in mesenchymal glioblastoma, and the downregulation of tenascin-c inhibits breast cancer cell development in vitro.<super-script>13, 14<super-script> Bioinformatics analyses showed that a number of other hallmark proteins involved in the epithelial-mesenchymal transition were enriched in DFT2-derived EVs, compared to DFT1-derived EVs.

Could the relative enrichment of tenascin-c suggest DFT2 is a more aggressive cancer than DFT1? Possibly, says Espejo; “Another paper shows that DFT2 has a much more undifferentiated state, which makes sense with what I have found. It’s a hypothesis, but DFT2 could metastasise quicker and be more aggressive than DFT1.” In the study mentioned, Patchett et al. (2020) analysed specific genetic markers of Schwann cells, the cell lineage from which DFT1 and DFT2 cells likely derived from.<super-script>15<super-script> Several lines of evidence suggested key differences between the two tumours, including a relative enrichment of genes associated with cell migration in DFT2, as well as decreased enrichment of genes associated with myelinating Schwann cells.<super-script>15<super-script>

Another key finding was the enrichment of proteins related to focal adhesion pathways in EVs from cultured DFT cells (both types), relative to healthy, cultured, fibroblast EVs. Surprisingly, these proteins were not enriched in the cultured DFT cells, suggesting the unique enrichment of these proteins in their released EVs. Of the enriched proteins, some have already been implicated in EV-associated metastasis in the lung – leading Espejo and her colleagues to suggest DFTD EVs may play a role in preparing the pre-metastatic niche in the lung tissue of infected devils. In general, however, EVs derived from DFTD cells bear hallmarks of their respective cell of origin; principal component analysis was used to compare proteomic datasets for EVs and cell lysates, and patterns of protein upregulation were compared across EVs and their parental cells.

The importance of reproducible isolation in EV diagnostics

Looking ahead, Espejo will continue to work on developing a test that could be used to distinguish DFT2 from DFT1. As part of this, she will continue to use Izon’s qEV platform for isolating EVs, i.e., the Automatic Fraction Collector combined with qEV columns. How important is reproducible isolation? “I mean, it's crucial,” says Espejo. “The idea is that anyone can reproduce this. And now we are trying to make a diagnostic that is more scalable, and rapid as well.” Future developments will include the exploration of different analytical methods, Espejo explains. “Because now we use mass spectrometry, which takes a lot of work – so the idea is to make an ELISA or a flow cytometry-based diagnostic test. And then of course, the isolation of the EVs is crucial, as you have to be able to do it over and over and get exactly the same results. It’s crucial.”

Towards a practical solution and early diagnosis of DFTD

Can EVs be used to identify DFT earlier, before facial tumours appear? While there is a lot of work to be done, Espejo is optimistic and has already released a preprint describing the identification of a serum-derived EV protein present in devils with latent infection (sensitivity: 93.8 %; specificity: 94.1 %).<super-script>16<super-script>

Altogether, the EV biomarkers identified have the potential to enhance the capacity of conservation strategies for the Tasmanian devil population. Not only that, but the findings are meaningful for the wider EV field, Espejo explains. “It’s pretty cool that EVs are able to distinguish two very similar cancers. And then in the molecular area, these cancers are similar as well, because they came from the same ancestral cell. So the fact that the EVs are pulling out one protein that is able to classify these two cancers is very good. And then in humans, you also have different subtypes of the same cancer – and of course, you can apply EVs to that.”