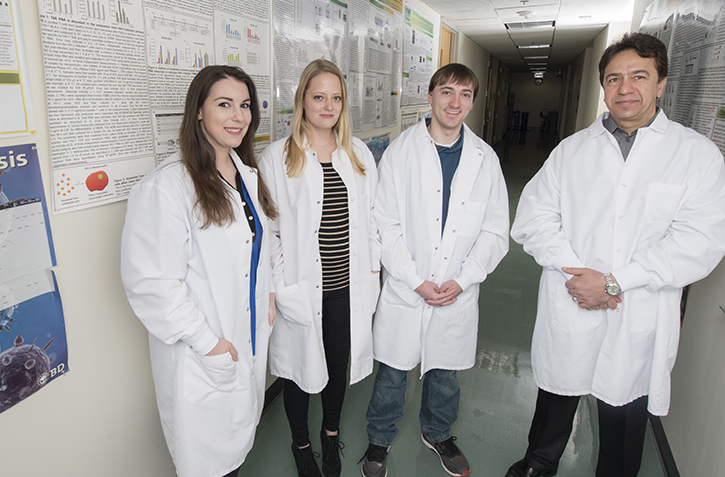 /About
Viruses, EVs, Ebola, and COVID-19 diagnostics: thoughts and reflections from Dr Fatah Kashanchi, Professor and Director at the George Mason University Laboratory of Molecular Virology.

Viruses are infectious biological entities usually containing a nucleic acid moiety in a protein coat. They are found abundantly in almost every biota on Earth. However, they are also responsible for causing a variety of diseases, often difficult to cure, due to their ability to integrate and copy themselves within the host cells. The world has witnessed a number of viral plagues in the past- Ebola Virus (EBOV), Human Immunodeficiency Virus (HIV) and most recently, the novel Severe Acute Respiratory Syndrome causing Corona Virus (SARS-CoV-2)- one of the largest RNA viruses identified so far. As of May 2020, Stephen Hahn, FDA commissioner, has announced the Emergency Use Authorization of Remdesivir for hospitalised COVID-19 patients1. Regulatory agencies do not have many options now but to make the conventionally red taped clinical trials more ‘adaptive’. With a broader scope for drug discovery, virologists are looking to find distinctive therapeutic targets from new virulence pathways. Professor and Director at the George Mason University’s Laboratory of Molecular Virology, Dr. Fatah Kashanchi has been lately working on recognising the inter-relationship between exosomes secreted from virus (SARS-CoV-2, EBOV, HIV) infected cells in humanised mouse models and novel molecular mechanisms of viral pathogenesis. Dr. Kashanchi has served as an editorial board member and reviewer of exalted journals like The Journal of Biological Chemistry (JBC), Retrovirology, Virology, PLoS, Cell, Nature Medicine, Nature Communications and Scientific Reports. We had a dialogue with him discussing the status quo of COVID-19 testing and the probability of beating the SARS-CoV-2 pandemic in comparison to past epidemics?

During his tenure at the NIH (1991-98), Dr. Kashanchi, a self-proclaimed RNA virus person, became part of one of the first groups to design in vitro transcription on naked and chromatin DNA. “This was rather difficult at that time. In the following years, we could see some viral transcripts outside of the cell”, states Dr. Kashanchi, who was then at the crossroads of unearthing the association between exosomes and virulence by serendipity. HIV type-1 (HIV-1) virions, one of the most dreaded viruses on the planet, contain three categories of genes- structural (env, gag, and pol), regulatory (tat and rev), and accessory (nef, vif, vpr, and vpu) apart from several noncoding RNAs (ncRNAs) and micro RNAs (miRNAs). Tat is a central regulatory protein that binds to the Transactivating Response (TAR) element to facilitate an efficient lengthening of the HIV-1 genome. On similar lines, exosomes also exhibit the presence of ncRNAs, which are involved in gene regulation of the recipient cells. The Kashanchi lab, in their pioneering research, showed that exosomes budding off from HIV-1 infected cells are responsible for making naive recipient cells more prone to infection through copious extracellular TAR RNA found in primary cell cultures and clinical samples. Furthermore, the co-incubation of latent cells with TAR RNA containing vesicles produced proinflammatory cytokines1. These outcomes could very well explain the rapid invasion of HIV-1 to different organs of the body, manifesting as Central Nervous System (CNS) and metabolic disorders making exosomes putative factors of virus spread.

In the first half of 2010, Dr. Kashanchi assumed his current role at George Mason University. The same decade also saw the outburst of one of the deadliest epidemics in history- The Ebola outbreak (2014-16). Dr. Kashanchi recalls, “One of my colleagues at CDC while working with EBOV patients observed the presence of antigens after months of infection." This was unusual since the filovirus and its symptoms had long subsided. So, what could be the reason? Based on his prior research, Dr. Kashanchi reasoned if there could be a cytoplasmic RNA virus playing hide and seek with the body’s immune system. And, is it in some manner related to the relapse of EBOV Disease (EVD)? Recurrence of viral infections is directly connected to lowering of the IgG antibodies in the system. To answer these burning questions, the Kashanchi lab conducted BSL-4 experiments on VP40, the primary matrix protein in EBOV, and found that it is secreted in exosomes. Extracellular Vesicles (EVs) from wild-type EBOV-infected cells were isolated using Izon’s qEV Size Exclusion Chromatography (SEC) columns. The study established that VP40 was linked to these EVs. The investigation further disclosed how the Endosomal Sorting Complexes Required for Transport (ESCRT) proteins assisted the packaging of VP40 into the exosomes2. ESCRT proteins regulate the recognition of specific cargo; it's packing into nascent vesicles and finally pinching them off from the membrane. Viral RNA machinery exploits the ESCRT sequence to slide into exosomes as viral proteins / nucleic acids to produce pro-viral effects as well as cell cycle aberrations in quiescent cells expediting viral spread.

So, does this mean exosome biosynthesis / release inhibitors can avoid the spread of the virus, specifically SARS-CoV-2? “Not necessarily”, replies Dr. Kashanchi. He added, “Unlike EBOV, SARS-CoV-2 is around 100 nm in size and far more pathogenic”. Dr. Kashanchi is currently working on three independent projects for COVID-19 diagnosis and therapy. The first approach is to detect specific primers for 5', middle and 3' end of SARS-CoV-2 reflecting non-uniformity in RNA polymerase transcribing activity. The second approach evaluates 420 FDA approved drugs as prospective COVID-19 treatment. Last but not least is the exploration of EV release inhibitors. For instance, drugs like Hydroxychloroquine raise the pH in endosomes and prevent virus particles (such as SARS-CoV and SARS-CoV-2) from fusing and entering the cells. Similarly, Vacuolar Protein Sorting 4 (VPS4) inhibitors can block disassembly of ESCRT subunits and stabilise ESCRT complexes that are involved in EV packaging. All these projects are currently underway.

Speaking of present-day COVID-19 diagnosis methods, both genetic and serological testing have their own merits. “Saliva is a better biofluid for testing”, ascertains Dr. Kashanchi, commenting on the importance of assessing IgG and IgM antibodies from patient samples. “The qEV column fractions can separate different sized EVs. They can potentially isolate antibodies (IgGs) in later fractions too”, adds Dr. Kashanchi. It is critical to understand that antibodies are not always negative (antigen-neutralising) in nature. E.g. the antibodies produced upon exposure to Dengue virus are positive antibodies, where they bind to the virus and cause an Antibody-dependent Enhancement (ADE) into the recipient cells. There is a high probability that this could be the case with SARS-CoV-2 as well4. “What we need is testing, quick testing yielding results in less than 24 hours”, remarks Dr. Kashanchi. Breakthrough technologies that can simplify and speed up testing are the need of the hour. The stakes couldn’t have been higher, and the race to discover the most efficacious COVID-19 vaccine is still on.